The European Union should rapidly scale up biomethane production at home and in Ukraine. Combine support for Ukraine with increasing our energy security, a more predictable gas price and fast climate mitigation. This paper outlines how it can be done.

Biomethane is the cheapest renewable gas available today. It’s cheaper than natural gas and about 3-4 times cheaper than green hydrogen at the moment.1 Plus it can be produced at scale. The European Commission estimates a potential of 350 TWh (33 bcm natural gas equivalent) per year for 20302, or about 7% of total EU gas consumption, produced from sustainable certified biomass. Several studies show that much more is possible.3 Yet the cheapest, most rapidly scalable energy-secure renewable gas does not receive the political attention it deserves. Clear and high level political support from politicians in Brussels and national capitals would give investors confidence. Even a non-binding European target similar to the one for green hydrogen would help. A group of thirty large European companies and the European Biogas Association recently called for a rapid growth to 350 TWh/year biomethane by 2030.4 The group is looking to cooperate with policy makers to make it happen. The recent Dutch announcement of a mandate of 20% biomethane in gas supply by 2030 is a game-changer, yet so far it has received very little attention even in the Netherlands itself.

The current situation in and around Ukraine gives the scale up of biomethane an immediate urgency. Over the past two years the transit of natural gas from Russia through Ukraine to the EU has dropped by 54%, from an average of 5.7 billion cubic metres (BCM) per month during 2019 to 3.1 bcm/month during the first three quarters of 20215. Last month, the European Bank for Reconstruction and Development (EBRD) estimated that Ukraine can produce 10 bcm/year of biomethane6, a quantity as large as all natural gas consumed by households in the Netherlands. A future development of biomass to biomethane gasification, using woody residues, would increase this potential significantly. Yet this innovative technology is not yet commercially available. Ukraine can export biomethane to the European Union through existing gas pipelines. There’s a real opportunity for a European initiative for large-scale biomethane production in Ukraine in which many benefits come together: increasing energy security, securing a more predictable, lower gas price, fast climate mitigation and supporting Ukraine’s economy.

Our idea is to create a series of ‘joint projects’ between EU member states and Ukraine to scale up biomethane with active supply chain involvement. Biomethane would be transported by pipeline to Europe where it would be used in various applications, and would be counted towards national renewable energy targets under the EU Renewable Energy Directive. Investments would be channeled through the EBRD which is already active in Ukraine7, including in financing biomethane projects, and has the necessary expertise. Individual EU member states would conclude agreements with the EBRD to invest in biomethane production capacity in Ukraine.

What volume should we aim for? Ideally, a combined European initiative involving several parallel ‘joint projects’ would help to finance the full 10 bcm/year well before 2030, scaling up (much) further afterwards once gasification technology becomes available. Part of the potential as estimated by EBRD lies in territories currently not controlled by the Ukrainian state and part relies on maize silage produced as main crop. Ukraine has unused land on which crops can be produced without causing land use change8, yet it takes time to organise and certify this. It makes sense to initially focus on waste and residues in provinces controlled by Ukraine. I propose an EU initiative to produce 6 bcm by 2030.

It takes several parallel actions to make the initiative a success. First of all, EU member states and the European Commission would need to show commitment. Of course, the Ukrainian government and gas TSO too, plus the Ukrainian private sector needs to be involved. A central role for EBRD makes sense. A large capital investment of €9.5 billion for 6 bcm/year production capacity is needed. Six EU donor countries could each sponsor 1 bcm/year of production capacity by contributing 30-50% (up to €800 million each) via the EBRD. Remaining capital investments could come from the Bank and the private sector.

Appetite to finance the initiative alone is not enough to make it happen. Long-term purchase agreements of biomethane are essential, securing offtake for seven years or longer. A collaboration between EU companies and governments can deliver the necessary investments and purchase agreements. I see three options to organise offtake. Firstly, with the current gas price, EU companies that use natural gas have an incentive to start using biomethane. This is especially true for companies with operations that fall under the EU Emission Trading Scheme (ETS) and thus are subject to a CO2 price on natural gas. Biomethane costs are 60% of natural gas plus CO2 price today and will likely remain cheaper for the foreseeable future.9 . A second (parallel) option also involves long-term purchase agreements by EU companies, yet triggered by EU member states introducing binding mandates for a certain minimum share of biomethane in domestic consumption, like recently announced by the Dutch government. Such mandates can be fulfilled by domestic production as well as imports. And finally, EU member states could guarantee the commercial viability of Ukrainian biomethane through price guarantees or contracts for difference. All of these options can be implemented in parallel and all require collaboration between EU companies, governments and the European Commission. This collaboration is essential to make the Ukraine initiative a success, and is equally necessary to rapidly scale up biomethane within the EU itself.

Tweaking Fit for 55 and and mobilising technical workforce

The European Parliament and Council have a role in the collaboration too, because a crucial element to ensure a successful initiative is a small modification of the EU Renewable Energy Directive. Currently, article 11(2) of the EU RED only allows ‘joint projects’ between EU member states and third countries on renewable electricity. It would be necessary to expand the scope of this article to cover renewable gas. That would allow member states to count imported biomethane from Ukraine towards national renewable energy targets. The EU RED is currently being amended as part of the EU Fit for 55 package, meaning that adding renewable gas to article 11 can be done within the next year.

Once investments and offtake are secured, and the EU RED amended, the largest remaining bottleneck would be to mobilise the technical workforce to build 380 relatively large biomethane installations.10 Many skilled Ukrainian workers are needed and technical experts from the EU. Germany has shown that building many installations in a short period of time is possible. In just nine years, between 2005 and 2014, some 6,000 (mostly smaller) biogas plants were built there. So it can be done.

1 Biomethane can be produced at scale for €60/MWh. Natural gas costs €80/MWh today and the futures price for next year is at that level too. Adding the EU ETS price to natural gas price adds another €18/MWh to the natural gas price, at the current CO2 price of €90. This means that biomethane today has a cost of 60% of the price of natural gas + CO2.

2 The European Commission estimates a 2030 potential of 30 Mtoe, which equals around 350 TWh for EU+UK. Total EU+UK natural gas consumption stands at around 450 bcm (billion cubic meters). In-depth analysis in support of the Commission Communication COM(2018)773 ‘A Clean Planet for all’, p. 81-82.

6 Zoning of potential sites for construction of biomethane plants in Ukraine – an interactive map - SAF Ukraine.

7 The EBRD in Ukraine.

8 To develop production on unused land or based on crop yield increase in line with the criteria as laid down by the European Commission. Sustainability criteria for biofuels specified (europa.eu).

10 Each with an annual production of 16 million cubic metres of biomethane, or around 2,000m3 per hour. Each requiring a capital investment of 25 million euro.

11 Biomethane has excellent greenhouse gas savings potentials, can reduce methane emissions from animal manure and can generate negative emissions if CO2 captured in the production process can be stored below-ground. Biomethane also contributes to agricultural circularity because nutrients from agricultural biomass are captured in digestate by-product which can be used as organic fertiliser. 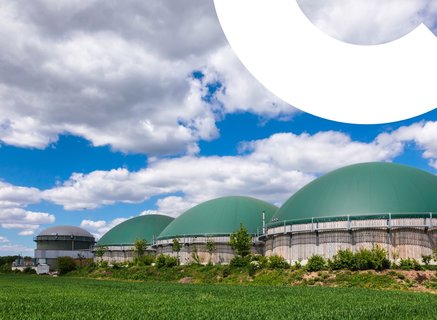 The cheapest, most rapidly scalable energy-secure renewable gas does not receive the political attention it deserves.