Energy System Optimisation: the next level in the energy transition

Now we are accelerating the European energy transition towards zero emissions, it becomes increasingly important to guarantee security of supply, minimise societal cost, maximise societal benefits, and retain public support for the transition. For that, we need to connect developments on the supply and demand side, and work on energy system optimisation!

So far, we have been working on developing the necessary components for a sustainable energy system. Important technologies like solar PV and wind power have already reached a mature stage, producing zero-emission electricity at low cost, and ongoing development still keeps improving those. Other technologies such as electrolysis and industrial electrification are still in their early stages of development.

As the components grow bigger, they start to interact with other parts of the energy system. We have only just begun to connect those developments via system integration. And now we already need to move on to add energy system optimisation, enabling and steering developments from an overall view on the net zero-emission energy system that we’ll need within a few decades. I will show what this means in three big areas of the energy transition.

Renewable gases: putting biomethane and green hydrogen to use

Biomethane and green hydrogen can be a great complement to (renewable) electrification, e.g. in industrial processes and hybrid heat pumps. And we will need them as fuels for the dispatchable power generation that we need when there’s little wind and solar electricity too. So far, most biogas installations produce baseload electricity and some heat locally; now we need to move on to purify the biogas to biomethane and use our grids to enable full use of the value it can have for the system, including its storability. At the same time, we are scaling up electrolysers for the production of green hydrogen; the next step is to site them close to large sources of renewable electricity production, to help integrate all that energy into the system.

The final step of energy system optimisation here means developing a vision on the optimal role of hydrogen and biomethane in the system, and steering towards that.

There has already been a great development in scaling up offshore wind farms, and making them cheaper, which has made them into workhorses of the energy transition in Europe. Next step is to cluster offshore wind farms in energy hubs, possibly including offshore electrolysis, and to connect those internationally. The same connections can then serve as additional interconnectors between countries, much needed in an electricity system largely based on wind and solar.

In the system optimisation step, it is all about a coordinated development of supply and demand, for electricity and hydrogen, taking into account the options to store energy for weeks and months.

Valuable components for the energy transition in buildings have already been developed, such as insulating glazing, insulation systems for roofs, walls, and floors, and more efficient, affordable and flexible heat pumps. Given the many millions of buildings that need an energy renovation, however, much more is needed to reduce their cost and ease of installation.

In a system integration step, concepts for whole housing districts are being developed, with a roll-out of heat pumps and renewable district heating. Hybrid heat pumps come into play as well, to take away the need to renovate the building first, and to reduce the additional power system investments associated with high winter peak demand.

The optimisation step will require new approaches, such as large-scale tenders for optimised insulation and clear frameworks for the development of sustainable heating, taking local, regional, and national system considerations into account.

For the overall energy system transition, we will need to apply this optimisation to the system as a whole. To take the three examples above: the vision on the optimal role of renewable gases will have an impact on the role that hydrogen plays in integrating offshore wind, and on the role that hybrid heat pumps play in achieving emission reduction in buildings. Another major factor will be the transformation of heavy industry to reduce its emissions to near zero; choices made here will have a big impact on electricity and hydrogen demand. Reaching an optimal system will require much more coordination between sectors and between member states than ever before.

There is a lot to gain, in terms of societal costs, societal benefits, and in the end, the speed at which we succeed in getting to net-zero emissions! 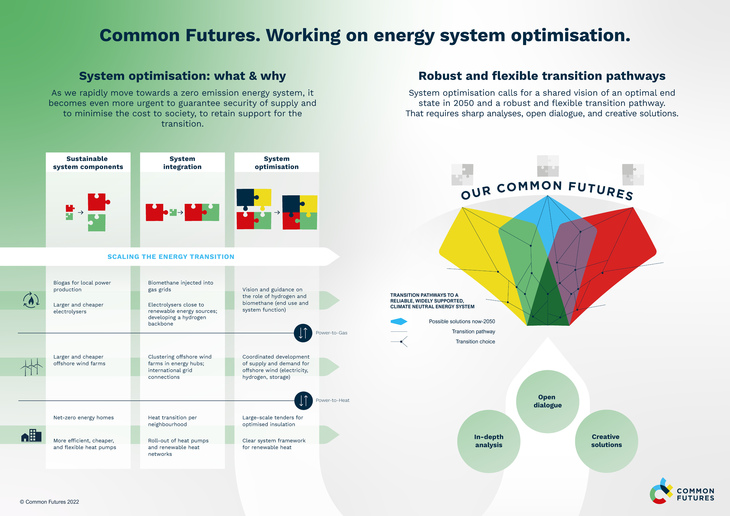 This article was originally published in the Summer 2022 edition of the European Energy Innovation Magazine.

For a high-resolution format of the infographic, see the attached PDF

High resolution format of the infographic for print

Shape common futures together with us